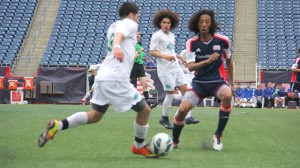 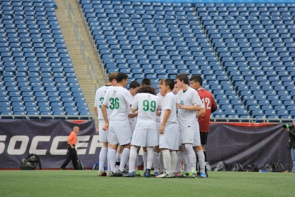 The Revs came out sharp and put the Bolts under pressure early. After about 15-20 minutes the Bolts figured out what they were doing and played a more controlled style. It became an even game with both teams having chances.
The Bolts had more clear chances in the second half. The Bolts played well and moved the ball sharply on the ground. Eric Udelson made a run down the outside and sent a long cross in towards the far side and Jack Doran finished it to give the Bolts the 1-0 win in the 56’ minute. The Bolts preserved the shutout thanks to some stellar defending and Brian Salazar between the pipes.
“We are playing well at the moment, the thing I’m most proud of is the way we are playing as a team. From practice to the games, and it’s translating. It’s a great group of kids.” –Coach Aidan Byrne
The 16’s are 4th in the wild card seeds, with a few more games to play; the Bolts can contest for an automatic playoff bid. 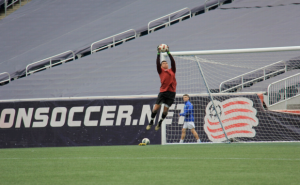 “Former Revere FC player, Bolts Academy U-16 Keeper Brian Salazar had an outstanding
performance in the game, denying any opportunities for the Revs to score.”

It was a derby day on Sunday, and the much anticipated rivalry game was under way!

The Revs struck first in the 6’ minute with an own goal by the Bolts. The Bolts keeper, David Price, was caught with a dangerous back passthat he couldn’t clear. The goal was against the momentum of play, as the Bolts were controlling the game the first 5 minutes. The Bolts responded in the 28’ minute with a goal from Matt Callahan off a Ty Goncalves corner kick. Callahan soared over the Revs defenders and knocked it into the left corner of the net.
The Bolts had a few more chances: Goncalves had two good looks from the top of the box and his shots went just wide left both times. Matt Dias Costa had a good look on a break away from the right, but the keeper came out, closed his angle, and made a fine save. The half ended 1-1 with the Bolts controlling the tempo of the game, fired up for the second half of play.
Again, against the run of play, #41 on the Revs had a long range shot. The Bolts keeper couldn’t control it, and #32 followed up the shot and finished the rebound. The Bolts responded immediately as Mac Steeves fired a shot off the post and Dias Costa was there to pounce on the loose ball and knock it in the net to make it a 2-2 tied game.
The Bolts “bash brothers” duo of Steeves and Pomeroy were top notch in the second half. They pressured and made the Revs defenders lives miserable all half. In the 69’ minute the Bolts took the lead, with the game winning goal being scored by Alex Ainscough. After exciting combination play of passing, Steves laid a ball off around the top of the box and Ainscough made no mistake and buried the ball in the bottom left corner of the net. A great assist, a great finish, the Bolts were ecstatic.

The Bolts kept up the pressure with Ainscough curling a shot off the crossbar, Steeves takes down the rebound and misses high and wide over the net. The Bolts had to defend as a unit the last 10 minutes. Thanks to the leadership of David Price and the back 4, the Bolts were able to prevail after some excellent stops and Price controlling the box.
The whistle blew, and the Bolts pumped their fists in the air. 3-2 Final in favor of the Bolts. It was a physical contest, and the Bolts won the game by playing soccer with more heart and intensity than the Revs. It was a much deserved win.

A Bolts statement was made on Sunday
and the boys now have rivalry
bragging rights until next year.